The Making of the ADA

The ADA did not suddenly emerge fully formed like Athena from the head of Zeus. It was a crowning glory of the Disability Rights Movement, including years of tough battles in the courts, of groundbreaking insights and analysis by disability rights scholars, of demonstrations and protests by grass roots activists, and of intensive legislative advocacy. Details about the development and passage of the ADA, from recognition of the need for such a law, to my drafting of the original ADA bill and its introduction in Congress, to work of the Legal Team in revising my version to produce the bill introduced in 1989, to congressional consideration and debates, to last-minute obstacles and dramas, and finally to the law’s passage and signing, will be chronicled and explained.

There Oughta’ Be a Law

A dramatic, concrete illustration of why an ADA-type law was sorely needed. A client of mine, a “cool” and “hip” jazz trumpeter who developed multiple sclerosis (at a time when there was no treatment to slow down or ameliorate the progression of the disease), was fired from his day job as a parole and probation agent when he became unable to handwrite his reports. He sought to challenge his unfair termination under the only applicable federal law prohibiting disability discrimination at the time. Because of deficiencies in the existing law, his lawsuit was obstructed and delayed at every turn. Learn what he went through and what happened to him in the end.

Documents Directly Paving the Way for the ADA

Two documents I co-wrote directly set the stage for the ADA: 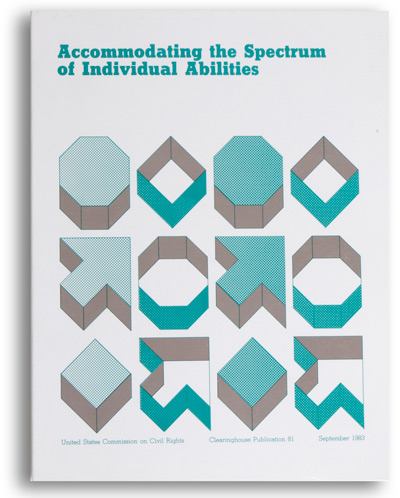 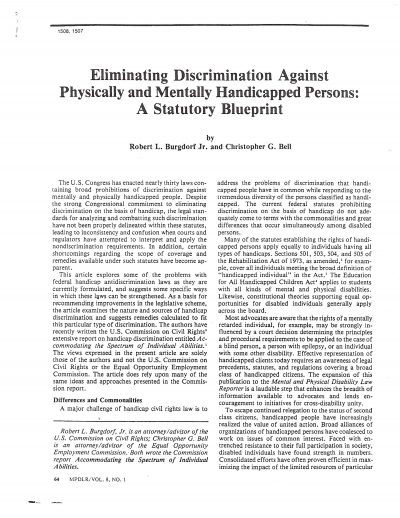 To the National Council

The National Council on Disability (NCD) is the independent federal agency that has spearheaded many critical proposals for improving federal legislation and programs affecting the lives of people with disabilities over the last 30 years, and is the entity that enlisted me to do much of my most important work, including writing the original draft of the ADA. How the agency came to occupy its role in the federal government, and how I managed, against the odds, to land a job with the Council are chronicled, along with the history and makeup of the agency, and key personnel (including some colorful, intriguing characters) involved in proposing the idea of enacting an ADA and then adopting my version of the law in reports to the President and Congress.

Toward Independence and the Vision of an ADA 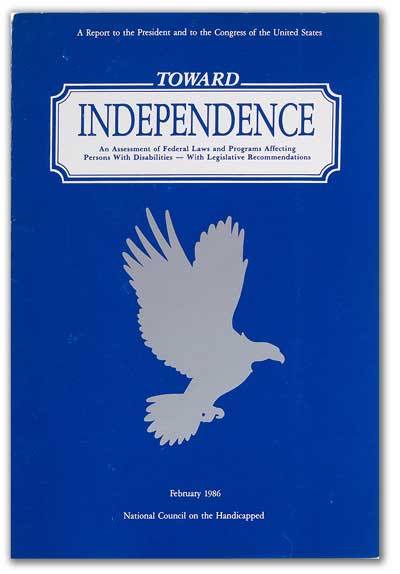 Congress directed NCD to review federal laws and programs affecting individuals with disabilities, and to develop a report containing legislative recommendations for improving them to the President and Congress by the 1st of February, 1986. Strategies and struggles by which the Council fulfilled this responsibility by producing its landmark report Toward Independence, which presented 45 legislative recommendations covering 10 broad subject areas are described. The first and primary recommendation was for enactment of a comprehensive law requiring equal opportunity for individuals with disabilities, with broad coverage and clear, consistent, enforceable standards prohibiting discrimination on the basis of disability, titled something like “The Americans with Disabilities Act.” I explain how I got to be the staff author of Toward Independence. A big part of the story is how the Council’s leadership, Executive Director, and staff managed to make decisions, surmount obstacles, and do a prodigious amount of work, with the result that a predominantly cautious, conservative group of presidential appointees adopted and advocated for a slate of bold and farsighted proposals.

Prelude to Drafting the Original ADA

The issuance of the Toward Independence report and a number of interesting and significant developments that took place in the months immediately following are detailed: a meeting of National Council representatives with Vice President George H.W. Bush to discuss the report; briefings on the results of the first-ever national poll of Americans with Disabilities; a presentation to the Council regarding accessibility of National Parks and Monuments focused particularly on accessibility changes to the Statue of Liberty; the completion of a coast-to-coast crossing of the U.S. by two intrepid and colorful wheelchair racers; and my drafting of a memo “Explaining and Defending the Equal Opportunity Law Proposal.”

Drafting and Introduction of the Original ADA Bill

How I came to sit at a word processor in my office at the National Council and write the original ADA bill, and a step-by-step account of the drafting, review, input, revision, and fine-tuning processes that went into finalizing the bill make quite a story. A push in the opposite direction was provided by Assistant Attorney for Civil Rights William Bradford Reynolds’s attempt to supplant the ADA proposal by advocating what he called a “piecemeal approach.” This, along with how the Council leadership and staff sought congressional sponsorship for the bill, some surprising resistance from within the Washington disability community, and how the “Deaf President Now” protests at Gallaudet University in March 1988 added fuel to the ADA efforts, are all described and assessed. A pivotal decision was to publish the Council’s proposed ADA bill in On the Threshold of Independence, the congressionally mandated January 1988 follow-up report to Toward Independence. The publication of the Council’s bill helped to galvanize grassroots support for the bill and boosted congressional interest in the legislation. The agreement of Senator Lowell Weicker and Representative Tony Coelho to serve as sponsors, and ticklish negotiations over some details of the bill are described, as well as the introduction of the Council’s version of the ADA on April 28th and 29th of 1988, and joint congressional hearings that were held in September.

The ADA in the 101st Congress

The story of the reintroduction, consideration, and passage of the ADA during the 1989-1990 congressional term, including “the ADA Legal Team,” the group of disability rights attorneys designated to represent the interests of the disability community in shepherding the legislation through the lawmaking labyrinth will be described. Revisions to the bill negotiated by the staff of congressional sponsors with the Legal Team to prepare the legislation for the new Congress, and the strategic considerations that led to changes that were made, will be discussed. The critical role played by Patrysha Wright (of the Disability Rights Education and Defense Fund), affectionately referred to as “the General,” in honchoing the disability community strategies and keeping the rest of us on task; and the critical role played by the hordes of disability lobbyists who stormed the halls of Congress to promote the ADA and sign up sponsors will be highlighted – all of which culminated in the reintroduction of the ADA on May 9, 1989.

I will describe Senate consideration of the bill in some detail, including the struggle to get the Bush Administration to endorse the legislation and the compromises made to obtain it; a crucial phone call to White House Chief of Staff John Sununu made by Senator Ted Kennedy after a dinner with members of the Legal Team at his home; how “pastrami sandwiches but not prescriptions” became a battle cry for broad coverage of public accommodations; and unfortunate 11th-hour obstacles that led to insertion of a list of disfavored conditions excluded from the coverage of the law.

ADA consideration in the House of Representatives required having four substantive committees and the Rules Committee approve the bill in order to get it to the House floor for debates and voting. After each of the four committees had passed a version of the bill, the responsibility fell to Representative Steny Hoyer to consolidate them into a single substitute bill. Sources of opposition to the legislation and several thorny questions that arose during House consideration will be described, along with dramatic demonstrations (including individuals climbing out of their wheelchairs and crawling laboriously up the stairs of the Capitol, dubbed the “Capitol Crawl”), by which people with disabilities put pressure on Congress to pass the law.

After both House and Senate passage had been achieved, two issues – coverage of the Congress by the law and an HIV-fear-inspired “foodhandlers’ amendment” – came heartbreakingly close to derailing the ADA in conference committee, and this section will tell how these issues were eventually resolved, including how Senator Orrin Hatch of Utah became the unlikely hero who saved the day for the legislation. The celebratory Senate session after the law’s final passage, including Senator Harkin doing sign-language interpretation of his exultant remarks, and Senator Hatch tearing up while talking about his brother-in-law with a disability, will be described.

The White House ceremony for the signing of the ADA into law, including descriptions of the attendees and festivities, and President George H.W. Bush s remarks, will be detailed. The President proclaimed the signing date, July 26, 1990, "an incredible day…an immensely important day," and characterized the ADA as an "historic new civil rights Act, ... the world's first comprehensive declaration of equality for people with disabilities." He added that "[w]ith today's signing of the landmark Americans with Disabilities Act, every man, woman, and child with a disability can now pass through once-closed doors into a bright new era of equality, independence and freedom."