Accessibility of the Statue of Liberty and the “Continental Quest”

Another agenda item at the Council’s business meeting on January 29 that was both unique and significant was titled “Presentation on Accessibility of the Statue of Liberty.” In 1984, the Statue of Liberty was closed for restoration. The closure permitted a substantial renovation of the statue and associated buildings, which involved: erection of massive scaffolding around the statue, replacement of the torch and the seven spikes on Lady Liberty’s crown, installing a glass-walled elevator, replacing the 1,600 wrought iron bands holding the statue’s copper skin to its frame, and generally restoring and upgrading the statue and other facilities on Liberty Island – all designed to spruce up the Statue of Liberty National Monument for its 100th anniversary in 1986.

As renovation plans were being formulated and considered, the issue of accessibility for people with disabilities was raised. A major impetus for focusing on accessibility of the Statue of Liberty grew out of an event called the “Continental Quest” associated with the International Year of Disabled Persons (IYDP) in 1981. The undertaking was the brainchild of Fred McBee, a journalist with quadriplegia, who had fancied the notion of organizing the first-ever coast-to-coast wheelchair trek across the United States and recruited two top wheelchair road racers and marathon champions, Phil Carpenter and George Murray, president and vice president, respectively, of the International Wheelchair Road Racers Club, to attempt such a crossing. The United Nation’s declaration of the International Year provided an opportunity and excuse to execute their daunting feat. The U.S. Council for the International Year of Disabled Persons, concluded that their “Continental Quest” undertaking would illustrate the IYDP theme of “full participation of disabled persons in the life of their society,” by demonstrating the physical capabilities of people with disabilities, particularly wheelchair athletes, and promoting physical fitness for those with and without disabilities; and designated Carpenter, Murray, and McBee as its “Special Ambassadors.”

Carpenter and Murray, two “wild and crazy” young men, and their intrepid Continental Quest support team, began their cross-country expedition on April 11, 1981, from the Santa Monica pier in Los Angeles, and completed it, 3,443 miles later, at the United Nation’s Building in New York City on August 26th. Their plan had been to travel the equivalent of a marathon – 26.2 miles – each day for four-and-one-half months, but they managed to average 36 miles per day, permitting time for rest, extra sight-seeing, and “fraternizing” with people they met along the way. The two athletes’ adventures during the trip, including descending roads in the Rocky Mountains at speeds that at times approached 50 miles per hour (they had equipped their wheelchairs with caliper brakes and “drogue parachutes” to control the speed), are described in The Continental Quest, an irreverent book by two members of the event team, Fred McBee and Jack Ballinger.[1] Carpenter’s and Murray’s progress across the country was chronicled by local newspapers, many of them along or near their route.

On August 24, 1981, after having traversed most of the continent, Carpenter and Murray passed through Jersey City, New Jersey, en route to the Lincoln Tunnel via which they would enter New York City. There they were joined at 4:00 a.m. by a local delegation that included the Jersey City mayor; a local member of Congress, Representative Frank Guarini; and Richard Bernard, a war veteran who lost his legs (one above the knee and one below) in Korea and was the coordinator of the New Jersey IYDP committee. The odd meeting time was occasioned by the need of the wheelchair voyagers, despite having a police escort, to schedule their passage on northern New Jersey’s heavily trafficked roads at odd hours. The location of this little get-together – at a curbside in the parking lot of a burger joint – was also quite unusual. When the course of the conversation turned to what Carpenter and Murray might like to do while they were in the New York area, they said they would like to go to the Statue of Liberty. The New Jersey officials responded that it was not accessible. Richard Bernard later wrote: “It seemed odd that two young men in wheelchairs … came across the continental United States, over many obstacles, but could not visit the Statue of Liberty or Ellis Island because of barriers.”[2]

Carpenter and Murray proceeded through the Lincoln Tunnel and made their way to the United Nations, where they were warmly received as ambassadors for the International Year of Disabled Persons. The blatant incongruity represented by the exclusion of disability ambassadors and conquering heroes Carpenter and Murray from the Statue and Ellis Island national monuments, meant to epitomize welcome and inclusion, continued to embarrass and trouble Richard Bernard and his colleagues, however. Within a month, they had gotten the full New Jersey IYDP committee to agree unanimously that “a committee should be formed to work toward eliminating the barriers pertaining to the disabled at the Statue of Liberty and Ellis Island.”[3] In 1982, after discussions with the National Park Service and disability organizations and accessibility officials in New York, New Jersey, and Connecticut, and with the support of the President’s Committee on Employment of the Handicapped (later renamed the President’s Committee on Employment of People with Disabilities), a committee, variously referred to as the Access-Ability Committee, the Statue of Liberty Accessibility Committee, the Statue of Liberty Access to the Handicapped Committee, and the Advisory Committee on Accessibility, was formed “to do everything possible to assist in making the Statue of Liberty and Ellis Island accessible to all persons.”[4] 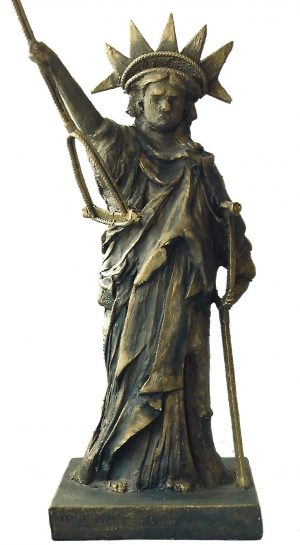 The committee, chaired by Richard Bernard, worked with representatives of the National Park Service to develop an 18-page report describing its recommendations for making the Statue of Liberty more accessible. After a ceremonial presentation of the report to Dave Moffit, Superintendent of the Statue of Liberty - Ellis Island Monument, and endorsement by the National Park Service, the report helped to generate 41 accessibility projects – 20 on the Statue of Liberty itself, five on the grounds of Liberty Island, and 16 on Ellis Island.[5] The cost of these accessibility improvements was estimated at three million dollars, to be raised through contributions, a task that was greatly facilitated on April 11, 1985, when the Disabled American Veterans organization presented a check for one million dollars designated for accessibility enhancement.[6]

Primary objectives of the “Presentation on Accessibility of the Statue of Liberty” at the meeting of the National Council on January 29, 1986, were to raise awareness and to solicit contributions from the members of the Council (Jerry Milbank’s J.M Foundation had already made a grant of $50,000). Accordingly, one of the presenters was Don Kent, Director of the National Organizations Campaign of the Statue of Liberty-Ellis Island Foundation, who talked about the importance of the Statue, the need for its restoration, the fundraising mission of the Foundation, and the need for additional donations. The second speaker was listed on the Council’s agenda as “David C. Park, Chief, Special Programs and Populations Branch, National Park Service.” I had not known Dave before I came to work for the Council, but by the time of this presentation he had already become a respected colleague and a personal friend. In his portion of the presentation, he described the accessibility improvements that were being incorporated into the renovation of the Statue and Ellis Island, to be completed for reopening on July 4, 1986, less than six months away. He pointed out that visitors using wheelchairs previously had had to enter the Statue through a rear entrance that required a long trip around the perimeter of the island to reach, and then required staff assistance to unlock the door and assist those using wheelchairs up a steep ramp. The alterations would raise the walkway to the front entrance to provide a gentle incline to the lobby of the Statue and widen the entrance to accommodate wheelchair users; relocating the entrance from the back to the front was a strong symbol of wider and more equal inclusion. Park explained that steps all over Liberty and Ellis Islands were being replaced by ramps; an elevator was being installed to carry people with mobility impairments to the various levels of the museum and an observatory in the pedestal; lavatories were being renovated to make them accessible; and phones, counters, drinking fountains, and sinks were being lowered. He noted that, among other advances that were groundbreaking at the time, sign-language interpretation and TDD (Telecommunication Devices for the Deaf) services would be available in the lobby of the Statue, that all films would be captioned and portable audio amplification devices would be provided, and that signs would include large-type and raised-letter formats. To enable visitors unable to reach certain areas of the Statue or unable to see, to have as much of the full experience as possible, he told of the addition of “tactile exhibits” and virtual experiences; these included exhibiting the Statue’s original torch and flame in the lobby, life-size replicas of Miss Liberty’s face and foot, a four-foot model of the Statue, and video monitors linked to closed circuit cameras giving views from the crown and other points of interest throughout the Statue.[7]

Fundraising for the project would ultimately be successful and the renovations were completed in time for the reopening of the Statue for its centennial celebration on the July 4, 1986, weekend, which featured an unveiling of the restored Statue, celebrated with lavish displays of fireworks, tall ships, laser beams, and speechifying. All of these improvements were primarily triggered by the transcontinental wheelchair odyssey of George Murray and Phil Carpenter.

Continue to Part 4: Dave Park and Accessibility of Parks, Public Monuments, and Other Outdoor Areas