Early Years with a Disability - Part 1

The words came from my grandmother Merrick, whose first name was Delila but who for reasons she never explained preferred to be called by the nickname of “Dink.” She had come to get me, her first grandchild, then 13 months old, out of my baby bed after a nap. As she leaned over to pick me up from where I was standing in the bed, I reached up to her but raised only my left arm. My right arm hung motionlessly at my side. Her yell immediately brought my mother – Grandma Dink’s daughter, called Patricia or Pat – rushing in from the adjacent room. The young mother (20 years-old) burst into the room, looked at her son, saw what I was doing, and immediately let out a loud and desperate cry, based on a fear that was rampant in America at that time, "Oh, my God! Bobby has polio!"

It turned out that she was right. I did have polio or, more fully, poliomyelitis. The only symptoms I had had to that point had been a slight fever and a little whimpering and crankiness. My mom thought I was teething. But when I didn’t seem able to move my right arm, the family doctor was called in, I was taken to the hospital, and, fairly quickly thereafter, my mother’s “diagnosis” of polio was confirmed. A short time later, I developed pneumonia. Then, a week after that, when I broke out with the measles, my mom exclaimed, "Thank God. Finally he has something I know how to deal with." 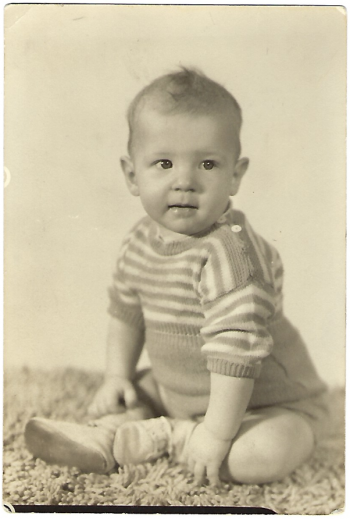 I had polio in August of 1949, in my hometown of Evansville, Indiana. No one knows exactly how or from whom I contracted it. The late 1940s and early 1950s were a time when the polio virus was sweeping in waves around various parts of the country, prior to the development of the Salk vaccine for widespread inoculations in 1955, followed by the Sabine oral vaccine in 1961. The number of reported cases during the period between 1948 and 1955 exceeded the combined total for the prior thirty years. For reasons still not understood, the major epidemics tended to concentrate during the summer months. The number of cases peaked in 1953 at around 60,000; in 1948, the year I was born, some 28,000 cases of polio were diagnosed. In the same month in 1949 that I had polio, a Life magazine article noted that some 8,300 cases counted so far that year exceeded the number of cases at the same time the previous year and lamented that "Polio seems more uncontrollable than ever."

Somehow I came into contact with and was infected by the disease. Considerable public hysteria accompanied the mysterious rampages of polio around the U.S. during this time. One focus of particular fear of contagion was swimming pools, and for the rest of her life my mother carried some guilt for having taken me, as a respite from the summer heat, to a public pool in a neighborhood park some weeks before. There is no way of determining, however, whether or not that was the source of my infection. Years later, research would establish that many children – perhaps as many as 90 percent – had polio without developing serious symptoms and thus were not diagnosed, so I may have caught the disease from neighbors' children, relatives, or others who came in contact with me without anyone being aware that the person had the virus. Often, one of the bewildering things about polio, and disabilities generally, is the apparent randomness of their occurrence.

The polio virus attacks nerve cells. For some reason, it does not prey on those that relate to sensation, but rather on those that send messages involved in moving – contracting and extending – muscles. Depending upon the number and location of cells destroyed, different areas of the body are affected and considerable differences occur in the extent to which the damage is permanent or function is recovered. At one end of the spectrum, many people – about one in ten diagnosed with polio – were killed by the disease. For others damage to the central nervous system caused widespread paralysis and inability to breath without the use of the so-called iron lung, either temporarily or long-term. Many people, including Franklin Delano Roosevelt, who had polio in 1921, permanently lost the ability to walk; others were unable to walk temporarily but eventually regained all or some of that ability. At the other end of the spectrum, many people suffered only relatively minor symptoms that disappeared over time; in about half of cases of polio which brought about muscle weakness, full muscle use had returned within six months. Most people who contracted polio, as noted before, developed only a slight fever and no other signs of the disease. My case was somewhere in the middle, statistically on the more serious end of the scale; I certainly did not suffer the most drastic effects, but neither was I spared some permanent paralysis and loss of function.

When polio destroys nerve cells, several things can happen. One is that if the loss is not too extensive, other nerve cells will take up the slack and little if any permanent damage will occur. If there is not sufficient back-up nerve capacity or the number of lost nerves is too large, the connection between the brain and particular muscle groups is disrupted. This has two principal consequences. First, the brain will be unable to tell a muscle to contract or relax. Second, because of the resulting lack of use and of inability of the nerves in the muscles to signal to the central nervous system to send nourishment to the muscles, the muscles will shrink away – the technical term is atrophy.

Where there are sufficient alternative or overlapping muscle groups, nearby muscles may take over for the damaged muscle tissue to a greater or lesser degree and relatively little loss of use may result. Another boy who later was a classmate of mine had polio around the same time that I did and his disease, like mine, was centered in one of his shoulder joints. For him, however, the permanent results were quite minor. He had a dimple-like indentation on the top of his shoulder, where some muscle tissue had atrophied, but the surrounding muscles had grown to compensate and he suffered no limitations in performance of his shoulder or arm. 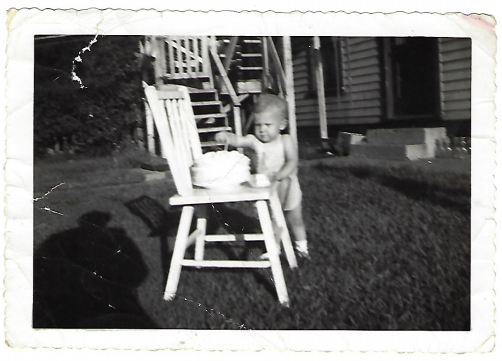 Celebrating my first birthday about a month before I got polio; this is the last photo of me with my right shoulder still intact.

For me, the damage was more serious. The muscles of my upper right arm and the top of the shoulder atrophied – they melted away like candle wax exposed to a flame. With the loss of the muscle tissue supporting it, the ball-and-socket joint of the shoulder fell apart; essentially, the ball of the upper arm bone dropped out of the shoulder socket. The result was a stair-step appearance of the top of my shoulder. The top side of the shoulder dropped vertically a few inches short of its intended breadth, resumed a horizontal course a couple of inches below where the upper end of the arm bone commenced, and then turned vertical again along the bone on its way down to the elbow. Most of the upper arm muscles including the biceps and triceps were almost totally devastated. I was left with no ability to use my muscles to raise or lower the arm. Somewhat surprisingly, however, the muscles at and below the elbow still functioned, albeit in a weakened state. I thus had a working lower arm and hand dangling at the end of an unusable shoulder and upper arm. If my left hand and arm lifted my right arm and placed the elbow on a table or desk, I could then use the lower arm, wrist, and fingers.

This description accurately portrays the direct, long-term effects of my bout with polio, with the considerable benefit of hindsight. In the months and first years following my diagnosis, there was no way of knowing how much permanent damage had occurred and how much function might return over time. 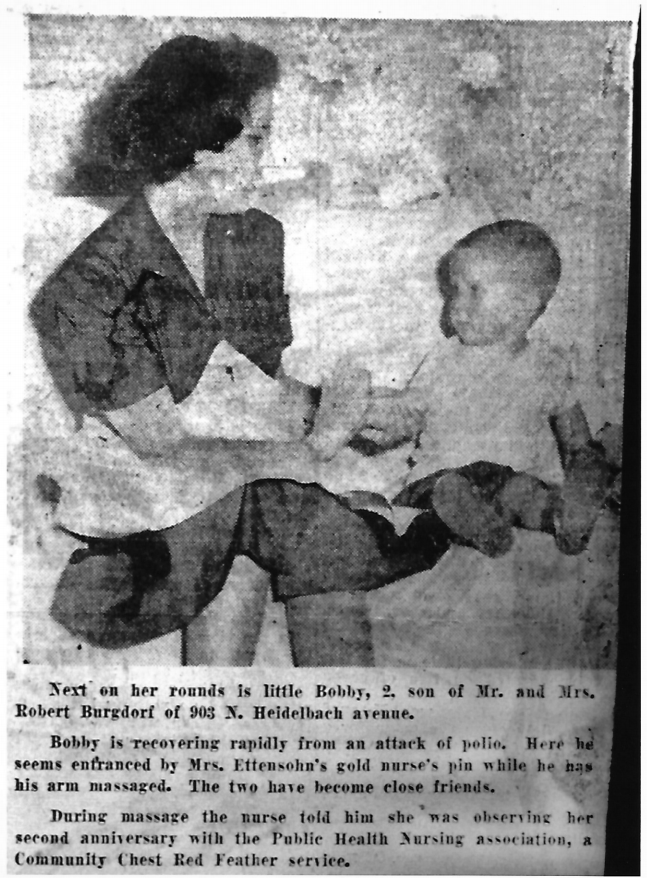 On October 1, 1950, a little over a year after my grandmother and mother discovered that I had polio, I made the local newspaper, the Evansville Courier. The story was actually about the life of a visiting nurse, Mrs. Joyce Ettensohn, and described a couple of examples of house calls she was making. The newspaper clipping, which has yellowed in the seventy years since it was printed, contains a picture of a toddler with a somewhat puzzled expression sitting in front of a woman in nurse's garb. The caption reads as follows:

Next on her rounds is little Bobby, son of Mr. and Mrs. Robert Burgdorf of 903 N. Heidelbach [Street].

Bobby is recovering rapidly from an attack of polio. Here he seems entranced by Mrs. Ettensohn’s gold nurse’s pin while he has his arm massaged. The two have become close friends.

During massage the nurse told him she was observing her second anniversary with the Public Health Nursing Association, a Community Chest Red Feather Service.

I am sure that, as a two-year-old, I was very impressed by Mrs. Ettensohn’s disclosure of her Association-service anniversary. Looking back on this picture and story, I feel great appreciation for the services provided by people such as Mrs. Ettensohn, while I also have some ambivalence about the use of my positive disposition and cuteness as a toddler as a prop or illustration for someone’s story.

The newspaper article writer’s statement that I was “recovering rapidly” contained a grain of truth, at least as to my general health, but in regard to the use of my right shoulder and upper arm things were not so rosy. Among other duties, Mrs. Ettensohn was trying to help my parents deal with exercises and a brace for my shoulder in the hope that some of the muscles might come back. At the time, the prevailing treatment for paralysis from polio was moving and massaging affected limbs, an approach pioneered in the 1930s by Sister Elizabeth Kenny, an Australian nurse, who rejected the previously prevalent practice of immobilization for prolonged periods. Several times each day Mom would move my arm up and down through the normal range of motion, counting out a certain number of repetitions for each motion. To ease the monotony, she learned to count to ten in German – the ethnic background of my father's family – and alternated counting in English and in German. In addition, an ugly brown leather and metal brace was fitted on my shoulder to hold my shoulder joint in place, and I had to wear this device for several hours each day. I am told that I cried vigorously each time I had to wear the brace. Although these measures continued for many months, they were of no avail, and eventually it became apparent that the deterioration in my shoulder and upper arm were permanent.

Contracting polio is how I came to have a disability; numerous others got theirs the same way prior to widespread administration of the polio vaccines. Although no exact figures are available, somewhere between 500,000 to 600,000 Americans who had polio were estimated to be alive at the end of the 20th Century, many of them with residual paralysis.[1]  But millions of other Americans joined the class of individuals with disabilities in other ways. The ways in which people get disabilities are almost unlimited.

Continue to Part 2: How “Crippled” Is He?