“My adult life has been peppered with moments of intense incredulity, in which I am unable to fathom quite how I came to be where I find myself, but have to smile, somewhat bewilderedly and not forgetting the bad times and defeats, at my good fortune.” 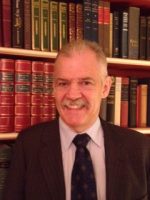 Robert Burgdorf is a leading disability rights writer, scholar, litigator, and legislative draftsperson; and is as person with a disability. He has advocated for, and written about, equal rights for people with disabilities for nearly fifty years, was involved in many of the formative court decisions establishing legal rights of individuals with disabilities, and was a key figure in the drafting and enactment of the Americans with Disabilities Act.

A professor at the David A. Clarke School of Law since 1989 (emeritus from 2014), he has taught courses on Disability Rights Law and Constitutional Law, and co-founded and directed the Legislation Clinic. A list of Professor Burgdorf's publications can be found on the School of Law's website.

In addition to insights on disability rights gained from his professional experience, Burgdorf has personal familiarity with the disability experience through his having a disability of the upper right arm and shoulder as a result of polio at the age of 13 months. Until he was eleven years old, he had almost no use of his right arm. After innovative surgery, he gained some range of motion of the affected joints. Both before and after the surgery he encountered negative reactions and discrimination because of his limitations. He also had to face the confounding uncertainty occasioned by some people considering his condition to be a dreadful, defining characteristic, while others treated it as minor or had not even noticed it.

Pivotal Stint at National Council on Disability, Authoring First Draft of the ADA (1985-1989)

Bob Burgdorf has been married to Dr. Andi Farbman since 1989. They live in Silver Spring, Maryland, a suburb of Washington, DC. Andi retired in 2018 after a four-and-a-half-decade career, the last 30 years leading the American Music Therapy Association. Bob retired from teaching in 2014, but took on a stint as a federal court Special Master in 2016, and since 2017 has been absorbed in writing material for this website.

Much of Bob and Andi’s personal joy and pride derives from their four adult daughters – Dorney, Molly, Gigi, and Arielle. Dorney is an Environmental and Social Impact Assessment Specialist, who lives in Northern Virginia with our two grandchildren, Kira and Conor; Molly is a disability rights attorney who is Director of Rights Policy at the Arc and lives in Washington, DC; Gigi is an actor who lives in London, England; Arielle is a writer, who is pursuing her Ph.D. in Literature at UC Santa Cruz.

Bob maintains close ties with his brother Jack and his sisters Sherry and Tammy, all of whom live in or near the family hometown of Evansville, Indiana, and keeps in touch with many of his aunts, uncles, nieces, nephews, and cousins.

He is something of a basketball fanatic, with particular devotion to women’s basketball; he was a zealous old-guy basketball player until a couple of hip replacements have kept him (at least temporarily) off the court. He has a collection of locks and keys, and Bob and Andi’s home is bursting at the seams with books.